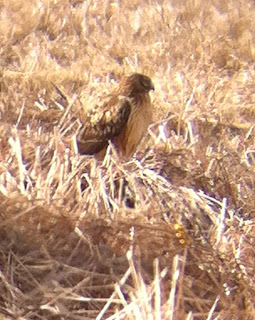 On my morning drive today, I had the option of sitting in traffic on the north side of the river, or sitting in traffic on the south side of the river.
I opted for the south side, having done more birding on the north side in the past few weeks. The southern route takes me through the Meadows, where I’ve seen some great birds in the past.

I paused there to check a large flock of resting Canada Geese, hoping that some rarer geese might have been mixed in. Last year at this spot, I found a rare White-Fronted Goose and (on a separate day) six Snow Geese. Today – no such luck. But as I watched, I noticed that the muddy field in the foreground of my view was alive with little birds – about 100 American Pipits (read HERE about my experience last week with pipits). Their silvery calls seem just right for the golden-silvery light that streams across the meadow during the early morning, illuminating the rising mists and touching the vari-colored trees with fire. So that was nice.

I drove on across the meadows and was about to leave the area when an unmistakable shape caught my eye…. Oops, can’t stop, there’s a line of traffic behind me. Shoot ahead to a little parking area, turn around, rush back and park in a convenient gravel lot … there it was, a lovely Northern Harrier, a juvenile bird with rich brown plumage and that unmistakable white rump. It glided low over the field, tipping and tilting as it went. Like owls, harriers hunt for prey by listening for movements on the ground. And like owls, harriers have facial disks – concave feathered areas around their ears – which gather sounds and help them pinpoint the location of their prey (frogs, mice, etc.). The harriers tip and tilt as they fly to “point” their ears in various directions.

(Earlier this summer, I was lucky enough to watch an adult male harrier hunting over large fields by the Saint Lawrence River. With silvery-grey plumage and black wingtips, this beautiful bird is known affectionately by birders as a “Grey Ghost.” And it really is ghostly, as it flies low over the field, dipping below the grass now and then, leaving an impression of a silvery wraith…)


The harrier rose over the trees and dropped down into the next field. As I started to pull out of the lot, another distinctive shape flashed by… I jammed on the brakes… Peregrine! A large, dark Peregrine Falcon (a juvenile) landed on top of a light pole very close by, calling and calling. I had a perfect view and got a good look at this, my favorite bird, before it took off again. It circled high, then dove down low over a flock of pigeons, scattering them but failing to grab one. It rose up and over the field again, then headed for an interior meadow.

So, in just one week, I’ve seen all three of our falcon species in town: American Kestrel, Merlin, and Peregrine Falcon. I also saw a Red-Tailed Hawk, a Sharp-shinned Hawk, and a Cooper’s Hawk this morning, leaving me feeling raptor-ous.

I also stopped briefly at a small lake across the highway, where I saw Greater and Lesser Scaup, a pair of Spotted Sandpipers, a magnificent Great Blue Heron, a Belted Kingfisher, several noisy and colorful Killdeer, Ruddy Ducks, distant teal (sp?), cormorants, and a flock of Mallards. On the way home, a few roadside stops yielded some good mixed flock action: American Robins and Cedar Waxwings devouring cedar berries; dozens of Yellow-rumped warblers eating poison ivy berries, a nice Blue-headed Vireo, a Blackpoll Warbler, and a bunch of Flickers.

In the past several days, we’ve had some new visitors at home, including first-ever yard sightings of White-crowned Sparrow and Palm Warbler. The Dark-eyed Juncos have arrived, and I hear the White-throated Sparrows in the hedgerow, though they aren’t at the feeders regularly yet. Ruby-crowned Kinglets come through almost every day, and yesterday a Yellow-rumped Warbler was at the suet. The family of Cardinals has emerged from the woods, visiting the feeder every day now (all five of them). The woodpecker action has been non-stop all year.
Posted by Quodlibet at 11:05 AM
Labels: Birding, Birds in Migration, Birds in my Backyard, Birds Out and About
Newer Post Older Post Home

All contents copyright © 2006-2022 and in perpetuity br />by Quodlibet.
All rights reserved. Dissemination, re-use, or duplication prohibited except by express permission of the author.